Thank you for joining me again to hear more about my journey and struggles with infertility. Your wonderful comments and support for the humble beginnings of this blog as well as support of Conceive Hospital are truly appreciated and we value your input and thoughts.

A couple of months after I was married, my father and I were enjoying a quiet afternoon in the living room. The way my father parented was very hands off. For example, his passion in life besides his family was music. He played saxophone for over 65 years and had just joined a brand new band (they even just had a photoshoot!) at the age of 78 right before he went into the hospital for cancer treatment. But as my sister and I were growing up, he never forced music on us. He was more of a man who lead by example. So it surprised me that afternoon when my father started a conversation with me asking if Eric and I planned to start a family, as he would like to become a grandparent one day. He had never said this to me in all of my 37 years. I actually was kind of shocked and taken aback by his question. I explained that Eric and I were undecided at that point if we were going to have children, but sure, it was a possibility. He said something along the lines of, “Well, if you want to, you might want to think about starting soon”. Again, more shock. I think I bristled just a little bit. He hardly ever told me what to do (and was my dad talking to me about sex? Ew haha). He did follow it up with, “But if you decide not to, that’s OK too.” Whew. Well, thank God for that! Then we both went back to watching whatever science program was on TV that interested us that day.

In the last few weeks of his life as my father was dying in the hospital, that conversation haunted me a bit when I thought of it. My only sister was childless by choice. Out of my only two cousins on my father’s side, the cousin who was adopted as a baby had a son that he was estranged to. And my other cousin had no children either. Thus the Broadwell side of the family had no heirs. Wow… I never thought that much about that before in great depth. I wrote my father a letter that I read to him days before he passed before the morphin drip kicked in and he slipped away. I read it to him. In it, I said that I was very glad that he and my mom gave me a wonderful sister to spend my days with (she started to cry as I read that since she was standing next to me), and that Eric and I were indeed very much considering starting a family, as I wanted him to know that before he passed. After I was done reading my letter, he acknowledged that he heard and understood it, and he mouthed that he loved us (he had a tracheotomy at that point and was on life support, thus he couldn’t talk). I was a blubbering mess for days, but my sister, her boyfriend and my husband were incredible support and a great life raft during this time of my life. If I didn’t have my sister, my husband and all of my other friends and family as well, I don’t know how I would have gotten through it. 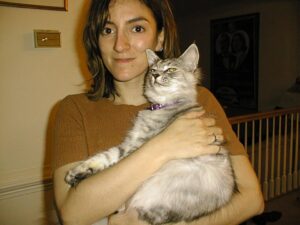 After he died, there was no way I could jump into starting a family. Grief is like the anti-sexy drug! Seriously. As grief overcame me, the LAST thing I wanted to do was have sex. I was just trying to get through each day as best as I could. And I did. I had asked my rock band that I was a founding member of at the time to give me two months to grieve and then I would be back into the swing of things. I didn’t much feel like singing and rallying our audiences to dance and get happy. I was so sad, that seemed an impossible task. During those two months, they replaced me with another singer. I was devastated again (as well as quite angry), but on a smaller level. I did feel like I was getting kicked as I was down. In the space of a couple months, I had lost my father, my band, and my beloved cat Sake. In an ironic twist of fate, my beautiful Norwegian Forest Cat died the same weekend my father did, from cancer as well. She died in my lap from a lethal dose a kind man came to our house to give her, so she could die peacefully and with us. She was only ten years old. My good friend told me she died so that she could welcome my father in heaven. Wow, beautiful sentiment but how sad! More tears, and more tears. It was like a never-ending box of tissues had to be with me at all times. 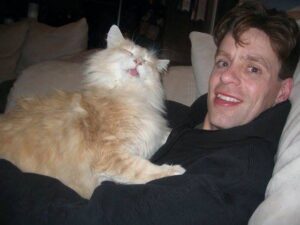 To try to raise my spirits, Eric and I found a Norwegian Forest Cat breeder near us and we would visit all of of their 30 cats including two litters. We called it kitten therapy. The kittens would run and play and nurdle and just be so adorable that you couldn’t help it but to smile. We eventually adopted two kittens from the two different litters and named them Merrie and Pippin, like the hobbits in Lord of the Rings (they were cousins, they ate everything in sight and loved getting into mischief, and they had furry feet). They helped soothe my soul little by little. And I also reformed a brand new band called Surrender Friday a few months later with new, wonderful musicians. Things were starting to come together just a bit…

A Childless Infertile Future vs Adoption

This isn’t an easy subject to explore, though the question does cross my mind from time to time. I try not to dwell on it for too long because the idea of facing the worst-case-scenario can feel scary. Nonetheless, there are moments when I do wonder – What happens if you reach the end of… END_OF_DOCUMENT_TOKEN_TO_BE_REPLACED

When the time comes to move on in infertility …

The last of winter’s chilly breath is rushing through the trees. I already smell the hints of spring flowing in through my window, along with the warm morning sun spilling onto my writing desk as the soft white lace curtains sway gently, and quite romantically, in the breeze.   “Here I am,” I think to… END_OF_DOCUMENT_TOKEN_TO_BE_REPLACED

Do You Have an Infertility Support System?

Last week, I had the privilege of attending a virtual women’s empowerment workshop. Hosted by a collective of successful business women, the various keynote speeches that they delivered offered a great deal of inspiration, encouragement and insight into what it takes to achieve both your life and business goals. I was quite uplifted by the… END_OF_DOCUMENT_TOKEN_TO_BE_REPLACED