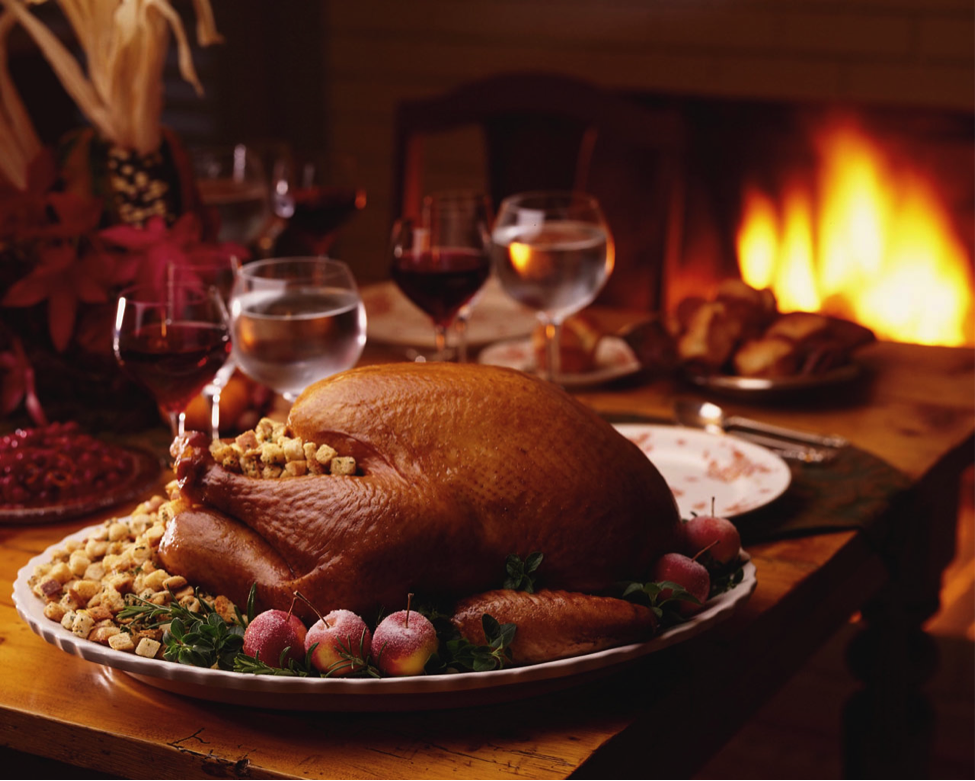 Soooo… If this post takes a minute to get where it’s going, you’ll have to forgive me. I’m in the final stages of a massive tryptophan-and-carbs hangover from Thanksgiving. And thanks to the power of tradition and memory, as Cathy reminded me, a turkey is required. “But sweetie,” I cautiously proposed as the guy who would spend four hours cooking the darn thing, “we’re only going to be five for dinner this year. And one of them [the two-year old] only eats cheerios and cheese.”

The thousand-yard stare I got was all the answer I needed.

A turkey. Is. Required.

And soup and stuffing and potatoes and green beans and cranberry sauce. And pie. Obviously, pie.

The problem with turkey, not to mention enough carbs to fuel a pro football squad, is that, when you have only four adults sharing dinner, what the heck do you do with a bird that ranges from 10-40 pounds? (For those of you in, you know, every country on earth except the doltish and backward USA and Myanmar, that’s about 4-18 kilos.)

Well, you make turkey sandwiches. And turkey soup. And turkey casserole. One year we even minced the turkey and cranberries and green beans and stuffing and rolled them into Thanksgiving-in-a-tube fried egg rolls. They were probably 1,000 calories apiece, but man, were they heavenly. (I ate four.) And when all of that is finally gone, you make turkey stock from the bones.

So I’ve basically been in a food coma since last Thursday. As my first non-soporific meal and a bit of caffeine finally work their way into my system, I started thinking, given the utterly insane logic of preparing roughly three hundred helpings for four people, why did we do it? Why did my best friend and I plan it, talk about it, think about it, and spend many joyous hours shopping and chopping and cooking it? And why is the menu largely proscribed and unchanging from year to year? Why did Cathy give me that furrowed brow when I even intimated that maybe we didn’t need a bird the size of a phone booth to feed so small a group this year?

You May Like  Creating Space to Grieve After Early Pregnancy Loss

Because it’s a tradition. Not a national, cultural or historical tradition, though it is all of those things, but a family tradition, a personal tradition. It is, most of all, something we want to do because we remember doing it. Often from as early as we can remember anything.

For millions of American families, the most important thing about Thanksgiving dinner, the reason we want it to be the way it is, is because that’s how it was when we were little. There has to be a turkey because there’s always a turkey. And that is where and how I at last and, I admit, somewhat circuitously, explain what the heck this has to do with infertility.

A few weeks ago, I wondered aloud on these pages whether those with and without children see the future differently. Cathy followed up on the same. The holiday week got me thinking about traditions and the power they have and the comfort they bring and the importance many of us place on them, and I wondered similarly, do I, as a childless adult, think differently about traditions?

If you’re struggling to have a family, or in our case, past that point, what happens to family traditions when there’s no family to carry them on? Like so much else of our legacy, our achievements, our history and our personality, when we’re gone are they too just… gone?

In my house growing up, my mom found traditional bread stuffing utterly boring. Mom’s stuffing isn’t made of bread at all. It’s made of onions and butter and potatoes and spices and sausage and it’s madly savory and delicious and wonderful. In Cathy’s Italian family, grandma’s handmade ravioli were part of holiday meals.

Will she and I be the last to use these recipes each holiday season? And does that make us think differently about those traditions?

I thought hard about this, and at least for me, there are two answers. First, traditions are, by their definition, group events. They’re familial or sectarian or societal, but on whatever scale, they are shared. Their very value comes from the communal nature of the experience. And as such, so long as we share them, with friends, with nephews and nieces and cousins and godchildren, they will outlast us. In some painfully cliché, existential what-will-remain-of-me-when-I’m-gone sort of way, I found this very comforting.

Second, the lack of an obvious, built-in mechanism for passing down those traditions (i.e. a couple of little rug rats) is in many ways as poignant and personal and heart-rending as the passing on, or lack thereof, of looks and personality and genetic code. My lack of children doesn’t make maintaining those traditions less important to me, it makes them more so. I am probably more joyous and more grateful and, most of all, more aware of the preciousness of the hours spent with family and friends and children and loved ones this weekend than many.

And so, while I will never be grateful for infertility, I can at least have gratitude for just how much it has made me see and remember and value the time we have, the people we love, and the traditions we get to share while we are here.

In other words, Cathy was right about the turkey…

You May Like  The pressure of depression during infertility