So you’ve probably heard about the very special event that happened this week.

The once-in-a-generation kind of event.

This week was the confluence of both a full moon and the Summer Solstice in the Northern Hemisphere.

This hasn’t happened since the Summer of Love in 1967 and won’t happen again until June 2062.

The Summer Solstice marks the longest day of the year. The sun is at its highest point in the sky, and it’s the official start to summer (according to the calendar). After the solstice, the days start to get shorter again, growing progressively shorter each day until the Winter Solstice in December, which is the shortest day of the year.

In ancient times, the Summer Solstice was the time of preparing and planting the crops for the fall harvest, so it’s long been associated with abundance and fertility. This includes fertility of the soil as well as human fertility. Many ancient cultures, including in Greece, Scandinavia and Eastern Europe, mark the solstice with rituals centered around finding a mate. The Solstice celebration at Stonehenge, one of the largest in the world, is a druid event celebrating the union of male and female deities.

I love the Solstice. I love the symbolism of ushering in the new season, and summer is traditionally a time of celebration. Adding in the full moon makes this time, energetically speaking, ripe for a new beginning.

I love the Solstice so much that I chose to get married on it. I loved the idea of celebrating my anniversary every year on the longest day of the year. This year my husband and I celebrate 8 years of marriage together. 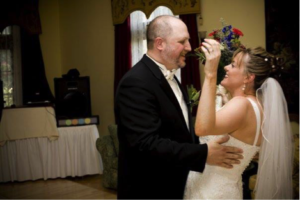 Adding in the full moon makes the Solstice extra significant since it doesn’t happen very often. Ancient Native American cultures in the United States termed the June full moon the strawberry moon, since strawberries are in season at that time.

Strawberries are a fantastic fertility-boosting food. Berries in general are, since they are loaded with antioxidants that protect the quality of our cells, including our egg cells, which are so precious when we’re trying to conceive.

Strawberries also have more Vitamin C than any other berry, which is also helpful if you’re trying to conceive. Vitamin C has been shown to help balance your hormones and regulate your cycles, which goes a long way toward improving your reproductive health. If you’re taking clomid, Vitamin C can also help you by helping counter the effect the drug has on ovulation.

And, strawberries are rich in folate, an essential nutrient for prenatal development, so it’s very important for pregnant and trying-to-conceive women. Just one cup of fresh, whole strawberries has 35 micrograms of folate.

In honor of the full strawberry moon summer solstice, I have a wonderful salad recipe for you. I ate this for the first time for lunch the other day and will definitely be making it again!

In addition to strawberries, this salad has two other fertility “superfoods” – avocado and spinach. Canteloupe is also rich in Vitamin C and has been linked to improved sperm health in men. So it really packs a punch!

salt and pepper to taste

Dressing: In a small bowl, whisk together honey, vinegar and mint. Add salt and pepper to taste. This dressing will keep in the refrigerator for up to 1 day.

Salad: In a medium bowl, combine spinach, avocado and cantaloupe. Toss with dressing. Transfer to serving plates and top with sesame seeds. 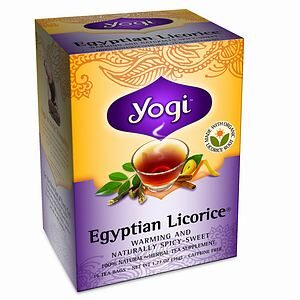 Got a sweet tooth like me? No problem. A treat every now and then is a good thing, and I am not the type of person to ban the things you love. Yes, we all know how bad refined sugar is, as how most these store bought “treats” often have more then you bargained for,… END_OF_DOCUMENT_TOKEN_TO_BE_REPLACED 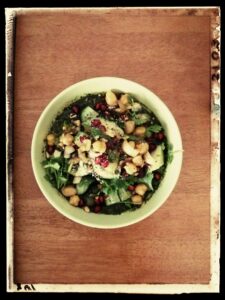 SOUPER GREEN POWER SOUP MAKES ENOUGH FOR 4 HUNGRY PEOPLE, including leftovers What You Need In the Kitchen The Basics Soup Blender If you haven’t got a soup blender, YOU MUST GET ON! This simple to use kitchen appliance has changed my life. Without being dramatic, it really has! In the Shopping Basket FROZEN: 1… END_OF_DOCUMENT_TOKEN_TO_BE_REPLACED